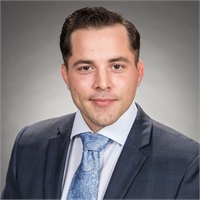 Daniel Mulroe envisions himself as “one-part financial advisor and two-parts behavioral coach”, and takes pride in the relationships he’s able to cultivate and develop. “When I was very young, my father passed away, but as I grew older I realized my mom had regrets about not having a financial plan in place when my sister and I were born and especially after my father passed. Because of this, helping and coaching people are part of the foundation of my mission.”

Before joining FFP Wealth Management, Daniel was an insurance agent at MassMutual Tristate, where he learned the importance of protecting one’s foundation. After getting his securities licenses, Daniel knew if he expanded his scope from insurance to financial planning, he would be able to help more people and foster those long lasting relationships. Coming from the insurance world, Daniel knew he wanted to join an independent firm where he could act as a true fiduciary. “That’s why I’m so excited to join FFP, they’re completely independent, meaning we put our clients’ interests and needs first, no matter what.”

Daniel’s path to becoming a Wealth Management Associate is unique. He attended the University of Southern Mississippi and graduated with a BS in Kinesiotherapy, which is a hybrid program focusing on Physical Therapy and Exercise Science. Daniel originally thought he was going to become a Physical Therapist, but realized quickly that he wanted to help people in other ways. He made the decision to transition away from physical rehab to finance while on a golf course. Daniel was visiting his parents for Thanksgiving back in 2018 and he and his stepfather decided to go golfing. They were notified they would be randomly paired up with a couple. After a few holes, Daniel quickly got to know the gentleman and by the eighth hole, he offered Daniel a job at his firm, MassMutual Tristate, where he was CEO and President in New Jersey. Daniel still had some doubts with the career transition since he had no financial experience, but when this man said “I feel like I’ve known you for years and we met two hours ago, that’s something you can’t teach and that’s special. People do not care about how much you know until they know how much you care”, he took comfort in his words and started his financial journey, ultimately ending up at FFP.

Daniel’s hobbies are playing golf along with any other sport, exercising, reading, listening to podcasts, spending time with family (especially his niece and nephew) and traveling. When he is not working, he is investing in himself through education by working to receive new certifications and licenses and giving back to the community by volunteering at food drives in Bayonne and Jersey City. He also Caddies at Baltusrol Golf Club on the weekends when he is free, not out of necessity, but for the love of the game and making a connection with people.